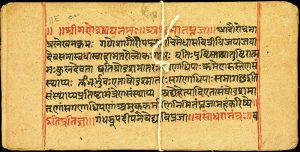 The Vedas are a large body of Hindu texts originating in ancient India, before about 300 BCE. Composed in Vedic Sanskrit, the texts constitute the oldest layer of Sanskrit literature and the oldest scriptures of Hinduism. Hindus consider the Vedas to be apauruṣeya, which means “not of a man, superhuman” and “impersonal, authorless”.

Vedas are also called śruti (“what is heard”) literature, distinguishing them from other religious texts, which are called smṛti (“what is remembered”). The Veda, for orthodox Indian theologians, are considered revelations, some way or other the work of the Deity. In the Hindu Epic the Mahabharata, the creation of Vedas is credited to Brahma.

There are four Vedas: the Rigveda, the Yajurveda, the Samaveda and the Atharvaveda.Each Veda has been subclassified into four major text types – the Samhitas (mantras and benedictions), the Aranyakas (text on rituals, ceremonies, sacrifices and symbolic-sacrifices), the Brahmanas (commentaries on rituals, ceremonies and sacrifices), and the Upanishads (text discussing meditation, philosophy and spiritual knowledge).